An all year-round destination, Pitlochry is one of the best locations from which to explore Highland Perthshire

2022 Highland Nights start on Monday the 30th of May, then every Monday evening until 5th of September.

Pitlochry Highland Nights are held every Monday night at 7pm, starting with the Vale of AthollPipe Band marching from Fishers Hotel at the centre of Pitlochry to the Recreation Ground.

We recommend following the pipe band from Fishers Hotel and back at the end of the evening. It is an excellent experience.

What to take with you on a Pitlochry Highland Night? 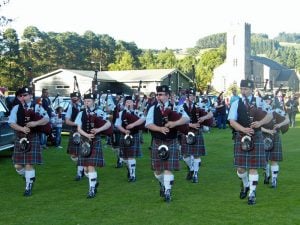 Take a rain coat or umbrella. Take something warm to wear, it can and does get cold. Take a sheet of plastic (if wet) or better still a cushion (provided it is water proof) to sit on.

If wet, the Pitlochry Highland Night is held in Pitlochry Village Hall, West Moulin Road, just above the Coop Supermarket.

The performers - As well as the pipe band, there are Highland and country dancers, Scottish Singers and accordionists.

Time - The show at the recreation ground starts at 7.30pm, finishing at 9pm.

Cost - Admission £7 for adults, £1 for children and programmes are £1.

The Vale of Atholl Pipe Band 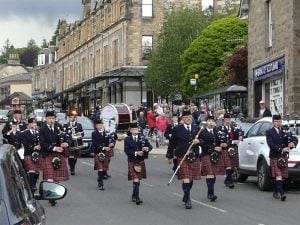 A Junior Vale of Atholl Pipe Band was formed in 1980, teaching the youngsters in the town and surrounding area. This was a significant developments as it gave the young people an avenue to excel. The Junior Pipe Band members gradually worked their worked up through the ranks, feeding in to the main band. This proved to be so successful, that a further band was created, The Pitlochry Novice Juvenile Pipe Band.

The Vale of Atholl Pipe Band has three 3 Pipe Bands – Grade 1, Juvenile and Novice Juvenile – with playing members on occasion approaching almost one hundred. What an incredible achievement for the small town of Pitlochry. 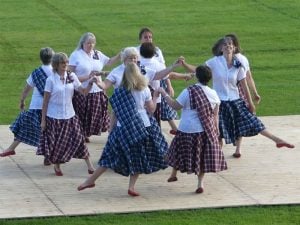 The Pitlochry & Blair Atholl Pipe Band was formed on the 1st November 2004, called. The focus of this Pitlochry Pipe Band is to cover all Celtic music. They would like to expand this programme to include other Celtic Regions, in addition to Brittany, France.

The Band has been to Brittany in France, learning Breton music and competed in the Breton Championships in Brest. It has strong link with Breton Bagad Sonerien an Oriant